SALMON WITH TOMATOES AND CAPERS

The one between salmon, capers and cherry tomatoes is the perfect combination. You just have to try it and let yourself be conquered by its goodness! For this today we reveal the recipe.

To prepare the salmon with capers and cherry tomatoes, cut the tomatoes in two, after washing them, and crush them lightly to remove most of the seeds and liquid, or empty them with a digger.

In a bowl, mix the breadcrumbs, capers seasoned with their preservative oil, a pinch of oregano, salt and pepper and mix everything together.

Stuff the cherry tomatoes with the aromatic bread, then arrange them on a plate and put them in the oven at 200 ° for 10/12 minutes.

In the meantime, remove any bones and fatty parts from the salmon and flavor it with salt, pepper, oregano and a drizzle of oil then leave it to marinate for about ten minutes then arrange the slices on the plate together with the tomatoes and cook in the oven for another 10 minutes.

In the meantime, cut the courgettes into slices and pass them in a pan with oil, a pinch of salt and pepper until they are very soft, pour them into a jug, add a few basil leaves and a little oregano and blend with an immersion mixer until to obtain a smooth and homogeneous mixture, if necessary add a little oil and at the end adjust the flavor.

Remove from the oven and serve the salmon with the cherry tomatoes, the courgette sauce and complete with the caper sprouts. 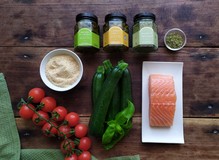 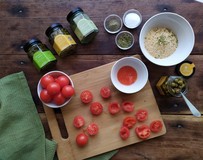 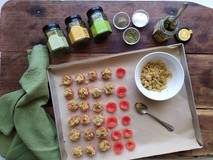 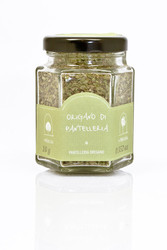 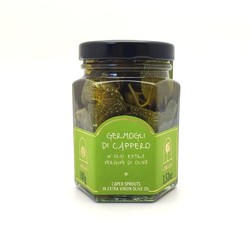